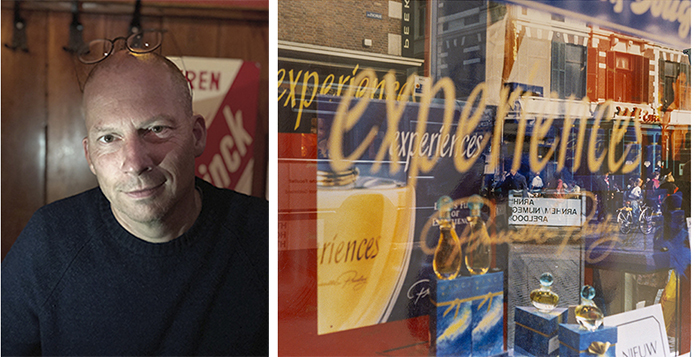 In 1994, I graduated from the ArtEZ University of the Arts in Arnhem (the Netherlands), direction graphic design.

To make my drawings and paintings I use photo’s, images from internet, my own memories or I intuitively create an image.

The big city in general, New York in particular, and places where people gather and meet are an important inspirational source to me.

People on the move in “New York”, who find themselves anonymous and in thought, either walking or in a taxi, or others who in are in contrast chatting and gesticulating to one another.

This anonymity of people in “New York”, the yellow cabs, cars and other traffic that keeps going non-stop past and between buildings as a big stream that continues constantly and where people, taxi’s and traffic keep rotating, is an intriguing spectacle for me to observe.

This abundance of sameness that at the same time presents a different picture all the time, is something I try to capture as spontaneously and directly as possible.

Because of the absurd quantity of information from different “layers” that is coming your way in the city like, taxi’s, busses, cars, people, buildings, shop windows, advertisements, road signs, traffic lights, colours and “sounds”, I no longer see these layers as separate parts, but they morph into one big whole, whereby everything mixes and thereby becomes a whole new “reality” to me.

“One cannot see everything as a whole all the time – or must I see the separate as a whole as well?” (Piet Mondriaan).

Thisway of looking also became clear to me during final project that was about the CITY Nijmegen and the way I perceived and experienced this city, when I was there.

The amount of images present, I secured by taking pictures of the reflections in shop windows. This is how I demonstrated what the city had become to me, namely: a big amount of information wherein all layers of images completely blended.

This resulted in the book “fragment”, that deals with the fragmentary perception with quotes from Piet Mondriaan as a guidance.

“I merely see parts of what is special, they build until they become another reality, which confuses our ordinary concept of reality.” And “Together these parts make a unity of broken images that are perceived in a visually automatic manner.